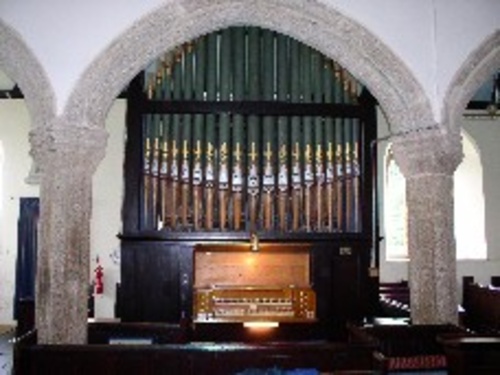 St. Mary’s is a fairly large and historic, stone-built church.

The organ, in a plain wood case, is behind the south choir stalls, with the console facing north, the open space beside it highlighting it as a prominent feature. It was built by A. Hunter of London and was brought to Churchstow from the Exeter area. It has two manuals, a radiating concave pedal-board and balanced swell pedal, with eleven speaking stops and three couplers. Included in the swell division is an 8′ Keraulophon, a stop more commonly found on theatre organs.

In 1996 it was rebuilt by Michael Farley. Mice had severely damaged the felt, and also the leather of the bellows, which had to be replaced. The blower was also replaced and the pedal action electrified. The display pipes on the front of the case are beautifully stencilled, as can be seen from the attached picture.