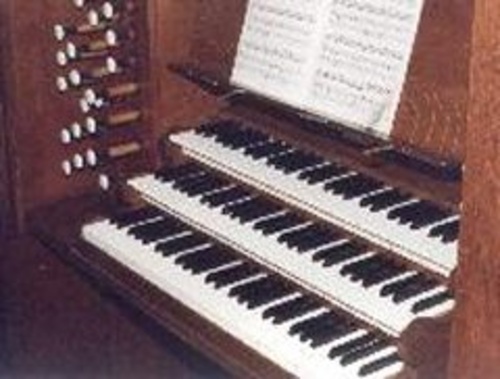 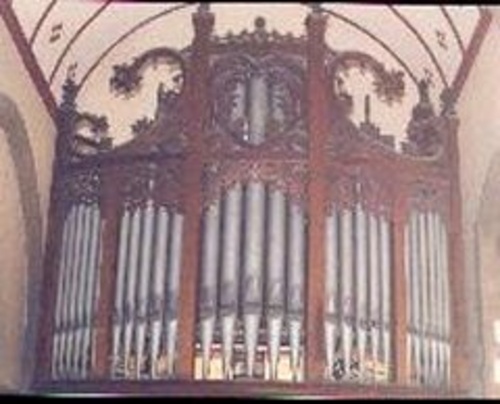 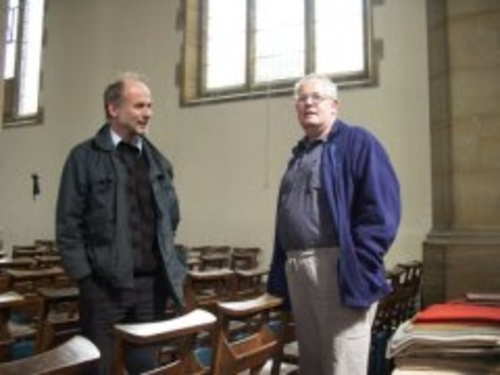 The materials of which the church is built are of interest, chiefly Plymouth limestone, which is very beautiful, with a dressing of Doulting stone, while Hopton wood stone is used for the base of the Devonshire marble font, and to a large extent in the chancel, combined with Pennant stone. Its length is 120 feet, its width 50 feet, height 60 feet to the ridge of the nave, while the aisles are 35 feet high to the wall plate. The width of the nave is 30 feet, and of each aisle 10 feet; the roof of the nave is barrel shaped as in so many of the old Cornish churches, though without any of their ornamentation. These proportions give it great dignity, and it lends itself well to processions, and to congregational singing. It is described as ‘an honest attempt to meet the requirements of a modern English church, in which the congregation shall be able to see and hear the service from all parts of the building, while the design should be characteristic of medieval work’, and is in a kind of free 13th century style of architecture.

The pipe organ in All Saints is located in the (ecclesiastically) southeast corner behind the choir seats, in an elevated position such that the organist has a good view of most of the building interior. The entire instrument is contained within the one case, with the possible exception of the Pedal reed, which is on its own frame extension at the rear.

Most of the instrument is the one originally constructed for this church by Hele & Co of Plymouth in 1894 at a cost of £750. At that time, the Choir and some slides on the Great and Swell were only ‘prepared for’.

In 1926 it was given a clean and overhaul by Henry Speechly & Sons of London, who also added the Choir stops and soundboard, the reed stops at 16′ and 4′ on the Swell, 8′ on the Great, and 16′ on the Pedal. They also installed the electric blower to replace the hand blowing apparatus previously used.

In 1950, Roger Yates of Michaelstow cleaned all the pipe work, and added the Swell Tremolo, the Pedal 4′ Nacthorn, and the pneumatic relay to enable the Pedal Quint to be derived from the Bourdon / Bass Flute rank.

The organ remained this way until 1980, when Lance Foy of Truro undertook a complete restoration, which included the provision of a balanced Swell pedal, and replacement of the pneumatic action to the Choir and Pedal with electric solid state switching. The Trombone was revoiced; a 2′ Fifteenth displaced a 16′ Double Diapason on the Swell (some of which was used to provide the top octave for the Pedal 4′ Flute); on the Choir a Larigot replaced the Viol d’Orchestre which was moved to the Great, where it displaced the Claribel. Although this in turn found its way to the Choir to replace the original Gedact, sometime after 1980 the Gedact pipes were reinstated although the stop knob still reads Claribel.
The organ was cleaned again in 1997, with minor repairs, re-voicing and regulation carried out by Lance Foy, who still maintains what is reckoned to be the finest instrument of its kind in the Duchy of Cornwall.