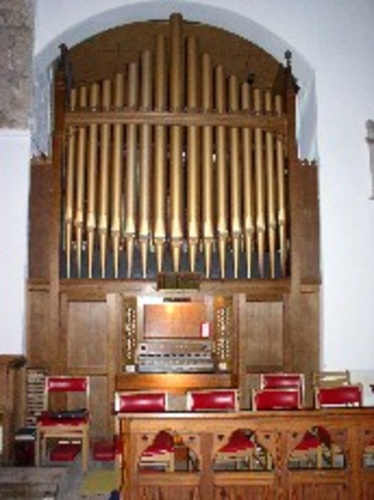 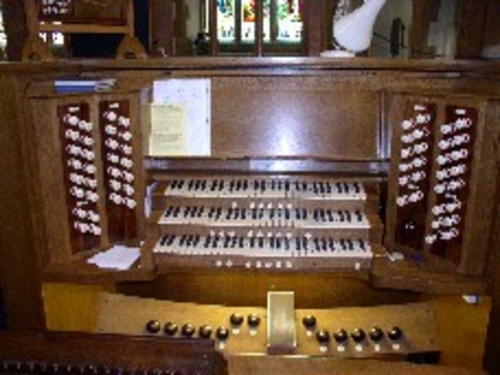 There has been a church on the site since Anglo-Saxon times and the present church was built in 1875, incorporating the tower of the previous church. It is built of grey ashlar with Bath stone dressing, the tower is of red sandstone. The chancel was added in 1899.

The interior is spacious with traditional pews of light wood. Some of the windows are of stained glass. The pulpit is carved stone. Behind the High Altar is a fresco depicting The Last Supper and this is a copy of the fresco in the Convent of St. Onofrio (St. Onuphrius). The west end of the church has been partitioned off to form a narthex of two floors, where tea was provided and was much appreciated by everyone. John Hopwood, our second Honorary Life Member, was the first to play, delighting everyone with the First Movement of Guilmant’s First Organ Symphony.

It is believed that the church has had an organ since the 15th century. Parish records state that in 1618 ‘a new skinne of leather’ was bought to repair the organ.

The present organ was built by Lewis & Co. of London in 1951. In 1973 it was rebuilt by Eustace & Alldridge. It has three manuals, there are 43 speaking stops plus couplers etc. and it is now computerised. The handsome light wood console is at the South Side of the chancel, with the organ itself filling a large part of the North side. The pipes facing into the body of the church are gold-coloured, while those facing the Chancel are of spotted metal. The shutters of the Swell box are vertical.