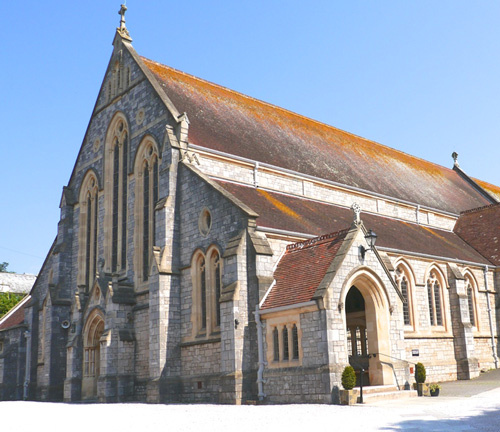 The Church was built in the nineteenth century and consecrated on 25th April 1893, the Architect being Mr George Fellowes Prynne. It was paid for by the Hon. Mark Rolle. At that time Budleigh Salterton was part of the parish of East Budleigh, but it became an independent parish in 1900.

St. Peter’s Church was consecrated in 1893 after a certain amount of delay and problems in its construction. All the stone used came from quarries in either Devon or Somerset, and the bricks used were from the local brickworks at Otterton. The design is of Early English type, the plan is in the main cruciform having a nave of five bays. The floor of the sanctuary is of polished marble and the first impression within the Church is one of size and space which is not over-obstructed by the slender piers and lancet arches.

The addition of fine carved reredos in 1931 made a dramatic feature in the East end. Nine mosaic panels depicting New Testament scenes are positioned around the Nave and were added over a period of time in the first half of the 20th century.

Watch the YouTube video A look at the pipe organ at St Peter’s Church, Budleigh Salterton.