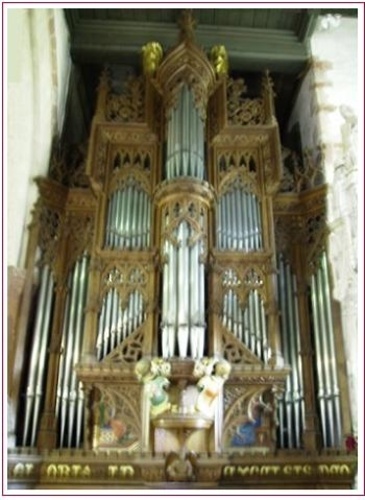 The first organ in the Parish Church was built c.1830 by a parishioner named Waycott, who was subsequently the first organist at the Church, the music having previously been supplied by the church band. Its replacement was built in 1858 by Waycott’s son who, unfortunately, drowned just before the opening ceremony. In April 1877 Henry Speechly of London completed a new two-manual organ for the Church, the 1858 Waycoft instrument being moved to Broadhempston Church.
In 1889, to celebrate his coming of age, Paris Singer donated funds for a new three-manual organ which was built under the tower by Charles Martin of Oxford. It cost £2,020 which included a gas engine, fixed in the ringing chamber, to provide the bellows with wind.

In 1896, the organ was moved to its present position in the south aisle chapel, necessitating alteration to the case, and the pneumatic action was renewed. In 1906 the organ was rebuilt by Forster & Andrews of Hull, and in 1930 by Hele & Co. of Plymouth. In 1967, the overhaul by Henry Willis IV brought the tonal scheme more into line with contemporary fashion. George Osmond & Co. of Taunton converted the key and pedal action to electro-pneumatic in 1980 and made some other alterations, and further alterations were carried out in 1985 by the Deane Organ Builders of Taunton. In 1998, the organ was fully renovated and improved by Deane Organ Builders. The instrument consists of three manuals and pedals with 54 speaking stops, 17 couplers, 2 tremulants, and a full complement of registration aids which includes a 64 level piston capture system. The organ has approximately 2,500 pipes and is one of the West Country’s finest parish church organs, capable of supporting all the demands of service work, and the performance of organ works from all periods and schools.