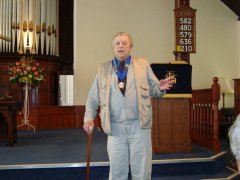 Michael was our treasurer for some years and immediate past president. He was a fine organist and choir director and spent much of his later years at Ss Peter, Paul & Thomas of Canterbury, Bovey Tracey.

A great character who will be sadly missed.

Sadly John passed away on the 1st of April 2010. He was appointed Honorary Life Member of the TDOA in 2004. 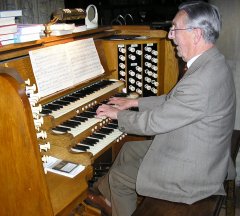 John was the organist of Paignton Parish Church for approximately 35 years. Until recently, in his mid 80s, he played as a relief organist in the Torbay area. John reached his 90th birthday towards the end of 2009. Just like James below, John was one of those great characters on the instrument; we last heard him play at the meeting at All Saints Kenton in November 2009. With a great sense of humour and a love of amusing pieces including the Hornpipe Humoresque, he was always full of fun.

God bless you, John, and may you make heavenly music for the angels…

Here is a lovely image of James Robinson playing the organ at Brixham Baptist Church in 2007.

Sadly James lost the fight against Cancer recently and we remember him with great affection. A huge congregation packed Holy Trinity Church, Salcombe for his funeral in July 2009.

Of course I’m no organist!

James, you will be greatly missed…