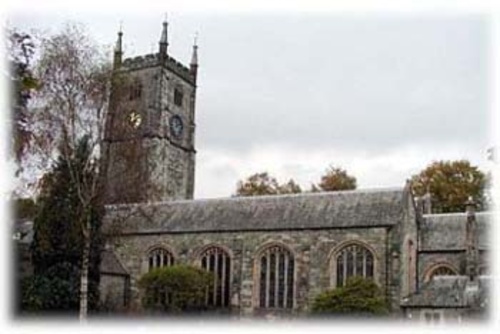 Tavistock Abbey was founded in 981 by Ordulf, on instruction by King Edgar.

By 1318, Abbot Robert Champeaux completed the reconstruction and enlargement of this church and it was re-dedicated on 21 May, 1318. Most of the walls and the base of the tower of this building (in the sea-green volcanic Hurdwick stone) still remain. Between 1425 and 1450 it was again partly rebuilt in the present early perpendicular style, and the fourth aisle, known as the ‘Clothworkers Aisle’, added by the gift of Constance, widow of Maurice Bird. Externally the church has changed little since then. The Tower base dates from 1318, the higher parts from the 15th century. The arches in the North and South walls formed the gateway to the Lay Cemetery separating the parish church from the much longer and narrower Abbey church. This was one of the four main entrances to the Abbey. The height of the tower is 28 metres to the top of the battlements. The Tower contains ten bells, eight of which were given by the 4th Duke of Bedford in 1769. These were re-cast and re-hung in 1925. The third of these is still called ‘the Poor Bell’ after one of the five which the Duke’s bells replaced. The original had been given by an old lady to be tolled whenever a poor person was buried because, until then, no bell was tolled for the poor ‘to hasten their departure into Heaven’. Two more bells were added for the millennium, partly with the aid of a grant from the Millennium Commission.

The organ was built to specifications drawn up by Dr Samuel Wesley, then organist and grandson of Charles Wesley. The organ was enlarged in 1952 and again in 1974 and again in 1989 with further pipes added in 1997. The oak screen was carved by local craftsmen for the restoration of the interior of the church in 1845. It was completed and the figures filled in in 1879. In 1845 the old pews of all heights and sizes were replaced, their ends, and the choir bench ends beautifully carved by local craftsmen, copying those in neighbouring local churches, particularly the 11th century church at Bere Ferrers.