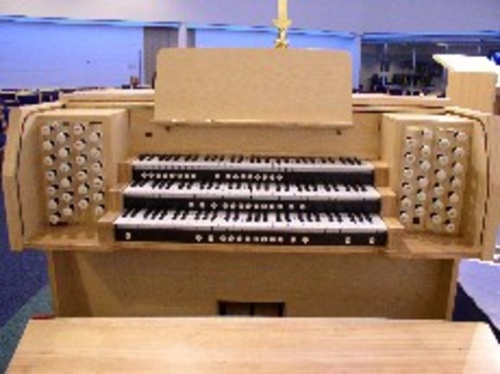 The church had stood on the top of the hill overlooking the town for hundreds of years, but was severely damaged by fire in 1992. The tower and steeple were restored and the bells re-hung, but the church was left without a roof. In 1997, it was decided that the best way forward would be to demolish the old St. Luke church in the main street and build a modern church on the site for all the people of the town.

The new church was opened in September 2002. The basic shape has six equal sides with a large raised sanctuary area which can also be used to accommodate large choirs and theatrical productions. The high domed glass ceiling above reflects natural light down onto it. The font was rescued from Holy Trinity and restored. There is also a baptistry. Stained glass windows from the old St. Luke have been incorporated into the Prayer Chapel.

The organ is a large three manual electronic, built by Eminent. The handsome light wood console stands beside the sanctuary, with the loudspeakers placed on the walls and camouflaged. It has conventional draw-stops with a large range of voices and many advanced technological features.

The organ specification is as follows: