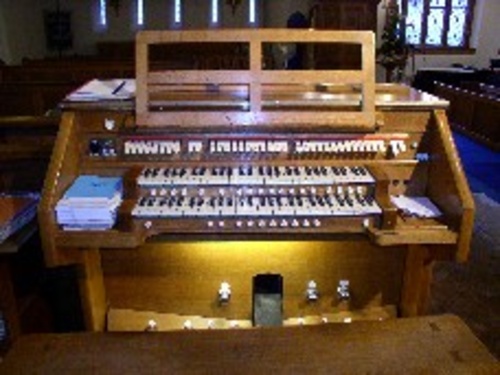 St Paul’s church, Preston, Paignton, is built of red sandstone. The foundation stone was laid in 1922. The proposed bell tower was never built, because of the outbreak of the war. The choir and sanctuary are very spacious and there is no rood screen. The carved wooden Reredos depicts the Last Supper and above it is a round, modern stained glass window showing Jesus as the Lamb of God standing in a pastoral setting.

The organ was built by Abbot & Smith of Leeds as a small chamber organ for a private house in Leeds. It came to St Paul’s in 1932, and was placed in the arched gallery behind the South Choir, where it is today. It was originally tracker action and it has evolved and been added to over the years. In 1969, Mrs. Gloria Duckham donated the money for the detached console with electric action.

The console stands by the North Choir and has two manuals with stop-key tabs and a full pedal-board. There are 26 speaking stops plus couplers and combination pistons.

The organ was repaired and refurbished by Michael Farley Organ Builders between January and March 2004. Extra thumb and pedal pistons were added and it was fitted with an electronic capture system. The capture switch allows for 12 different settings of the whole organ, for each of the 8 general pistons, and varied stop combinations for the Swell and Great thumb pistons. The Pedal pistons duplicate the settings chosen for the Great thumb pistons.